On 27th February, PIC signed MOC with PTO* at the headquarter of PTO in Suva, capital of Fiji. Director of PIC Mr. Saito, who participated in Joint Public Private Economic Mission to Fiji and Director of PTO Ms. Gale and other related personnel attended the signing ceremony.
*PTO was established in 1983 for the development of tourism in the region. 21 countries, mainly Pacific Island Countries, are the members of the organization. In addition to government members, PTO has about 200 private sector members.

PIC and PTO have already interacted for promoting tourism between Japan and Pacific Island Countries. Taking the opportunity of this agreement, both parties enhance the partnerships by trying to increase the tourist from Japan as well as by facilitating exchange and human resource development for those people involved in tourism industry.

Specifically, Tokyo Olympic and Paralympic Games will take place from July to August this year in Japan. Pacific Islands Countries plan to jointly operate Oceania Village during the games. PIC and PTO confirmed to cooperate in the field of Sports Tourism to capture available opportunities. 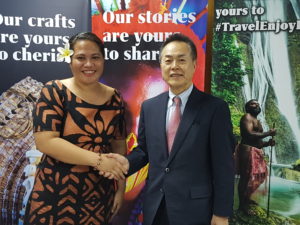