On October 22, the Samoa Trade Promotion Seminar was held; attendees included Sila, the Samoan Ambassador to Japan, and Honorary Consul Inoue at the kappo restaurant “GenPei” in Iidabashi.

This seminar was held in response to the growing interest in business exchange between both countries, helped by the success of the “Japan-Samoa Trade and Investment Seminar” in Samoa last July, which was sponsored by the governments of both countries, as well as the “Samoa Business Exchange Delegation” dispatched by PIC.

The seminar led off with Ms. Takada, the Promotion Coordinator of PIC, who introduced products such as food, cosmetics and handicrafts that the Samoan government currently wishes to export. This was followed by a speech about the benefits of business with Samoa given by Mr. Wakamatsu, an executive officer of Joban Kosan, who also participated in the “Samoa Business Exchange Delegation”.  Next, Honorary Consul Inoue, the president of the company, gave some advice to promote Samoa-Japan business as a supporter of Samoa.  Finally, Ambassador Sila said “Samoa has been open to Japanese companies in various business fields and it would welcome them in Samoa”.

In the following reception, various Samoan food was sampled by the attendees, such as the traditional dish “Oka”, which was prepared by “GenPei” according to instructions from Ambassador Sila’s husband, as well as bread made from Samoan breadfruit flour.

Over 20 people who had interest in starting new businesses with Samoa gathered at the events, despite it being a Saturday afternoon, and they were able to expand their knowledge about Samoa. Some attendees showed real interest in dealing with Samoan products. Thus, the events appeared to be successful for PIC regarding possible future business development.

While PIC held this seminar on the subject of trade with Samoa, in the future it plans to hold similarly small seminars with specific themes a few times a year. 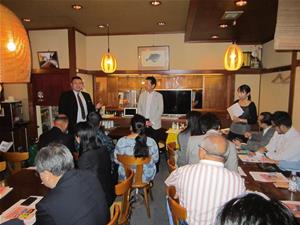 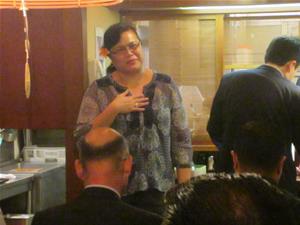