On November 17, PIC made a courtesy visit to Mr. Alfred Alfred Jr., the Resources and Development Minister of Republic of The Marshall Islands, who visited Japan for business meetings with Japanese companies as well as on-site visits, and exchanged opinions for promoting businesses between Japan and Marshall Islands.

Minister Alfred is one of few ministers from the Pacific island countries who are well familiar with Japanese businesses, because he was an OB of the Japanese government scholarship and had been serving as the Deputy Chief of Mission of the Marshall Islands’ embassy in Tokyo. One of his purposes of this visit was to explore the possibilities of joint ventures for introducing the technical capabilities of Japanese companies to utilize abundant fishing resources, coconut oil and other resources of the Marshall Islands. Accordingly he visited Yaizu and Sendai.

At this meeting with PIC, Minister Alfred said that his country would like to participate in the trade exhibitions and tourism promotion fairs to be held in Japan in cooperation with PIC in order to proactively promote the export of products according to the needs of the Japanese market. Also, he revealed the plan to dispatch a mission to Japan to promote exchanges and cooperation with Japanese companies in the first half of next year.

In return, PIC introduced that PIC sent its staffs to Marshall Islands to have a business promotion seminar in February this year, and promised PIC would promote projects to expand opportunities for trading and investment in cooperation with the Marshall Islands government. 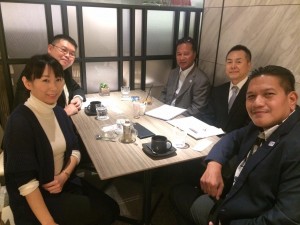 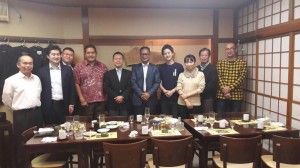