On September 26, Mr. Christopher Nemaia, the marketing officer of the Solomon Government Tourist Office, and Mr. Francis Deve, the marketing manager of a local tour operator, visited PIC. (Mr. Nemaia had been visiting Japan to participate in the JATA Tourism EXPO2016, which was being held until the day before.)

The government of the Solomon Islands has focused on its tourism industry, and in particular, promoting to the Asian tourism markets. This year, it had a booth at the Tourism EXPO for the second year in a row.  Furthermore, it has been making strong efforts to develop resort tourism in the Western State around diving spots with the cooperation of Mr. Noboru Yamabe, the president of PNG JAPAN. During this visit to PIC, opinions regarding the current status of Solomon Islands tourism were exchanged, along with the confirmation that both parties would cooperate in the Marine Diving Fair as well as the Tourism EXPO from next year. 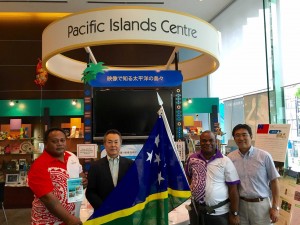 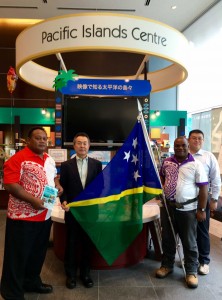