I would like to express my deep appreciation for all of your support and help to PIC last year, and hope we might deepen our relationship this year.

Last December we held a reception to commemorate the 20th anniversary of our establishment and  made a renewed commitment to our next leap in strengthening our relationship with Japan and the Pacific Island countries. We will make our next steps towards fulfilling this commitment in 2017.

And so, I would like to briefly touch on the following three points PIC plans to focus on this year.

First of all, as I mentioned during the greeting in our reception last December, we would like to work on various events in a slightly different way, the “PIC Initiative”, to further promote trade, investment and tourism, based on the know-how that PIC has cultivated in the last 20 years.

Secondly, we would like to pass along information about various PIC activities to its stakeholders in a timely and effective manner by combining information tools to further expand PIC’s range.

Lastly but most importantly PIC wishes to further enhance the human network with the people who are involved in the Pacific Island Country business, that support PIC’s activities. We would like to greatly expand the network of new people and geographic areas.

All of the staff at PIC look forward to a productive 2017. 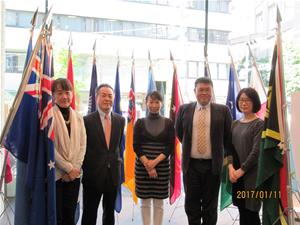