Exchanging views with Ms. IUTA, Ambassador of the Republic of Kiribati

On March 13, Ms.Teekoa Iuta, Ambassador of the Republic of Kiribati to Taiwan,  (concurrently, Ambassador of the Republic of Kiribati to Japan) visited PIC on the occasion of her attending the 6th anniversary of the Great Eastern Japan Earthquake.  Mr. Kentaro Ono, Honorary Consulate of the Kiribati to Japan in Sendai, also joined her to discuss business relationships between Japan and Kiribati.
Ambassador Iuta had previously come to Japan to attend the Ministerial Interim Meeting of Pacific Island Countries and Japan in January this year, so this was her second visit. She talked about various promotional ideas including tourism centered on Christmas Island. Finally, it was agreed that she would cooperate with PIC on the 8th “Pacific Islands Leaders Meeting” next year. 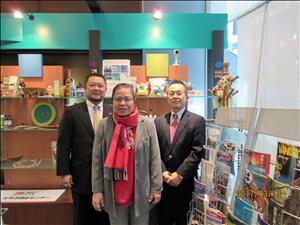 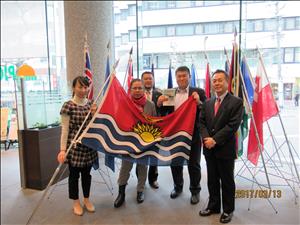