From April 7 to 9, PIC exhibited at the “Marine Diving Fair 2017”, which was held at the Ikebukuro Sunshine City Cultural Center. While cherry blossoms were in full bloom, despite bad weather, more than 50,000 visitors attended the fair with more anticipation than last year. Among them there were many enthusiastic divers and travel lovers who were looking for new ocean resorts.
In this fair, a corner of the main aisle was almost completely occupied by Pacific islands booths from Palau, Papua New Guinea, Kosrae of the Federated States of Micronesia, Cook Islands, and Marshall Islands, a first time participant, on the initiative of tourism authorities and diver groups. Many visitors, who showed interest in Pacific Island Countries as new diving spots also came to the PIC booth. It included supporters in the field of tourism in Pacific Island Countries such as travel agents, who actively promoted those countries’ attractive points as well. Also, for the first time, PIC held a quiz & lottery about the Pacific Ocean that attracted many visitors with a long queue and much enthusiasm.
On April 7, PIC Director Saito and two other presenters gave energetic talks about the sightseeing charms of Samoa, Vanuatu and Fiji at the JATA (Japan Association of Travel Agents) Destination Seminar. The audiences, who listened to the talks with great interest, came to the PIC booth to discuss the details of each country. 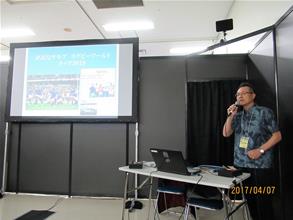 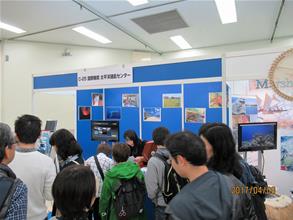