On May 2, Dame Meg Taylor, Secretary General of Pacific Islands Forum, and her staff visited PIC while traveling to Japan to attend the annual meeting of the Asian Development Bank (ADB) in Yokohama. PIC Director Saito welcomed them and explained PIC’s current activities and work plan for FY 2017. Secretary General Taylor acknowledged PIC’s facilitation in importing products from the Pacific Islands to the Japanese market. She also requested PIC to continue promoting business in the Pacific Islands in cooperation with other Pacific Trade and Investment (PT & I) Networks.

After this meeting, PIC invited Secretary General Taylor and her staff to a luncheon with H.E. John Fritz, the Ambassador of the Federated States of Micronesia, H.E. Francis Matsutaro, the Ambassador of the Republic of Palau, and Ms. Annette Note, Charge d’affaires (Counselor) of the Republic of the Marshal Islands. They shared opinions on PIC’s activities and PT&I Networks with 3 Micronesian countries.
The ambassadors commented on such issues as the liberalization of the labor market both within the region and with Japan, negotiations on fishing, and the regional air route.
Finally, Ambassador Fritz praised the Investment Guidebook in Japanese, which was published by PIC last year, as did Ambassador Matsutaro the cooperation between the Palau Visitors Authority and PIC to promote tourism in Japan. Ms. Note thanked PIC for its effort regarding the electric vehicle “social experiment” by Honda, as well as the establishment of a rearcart factory in Majuro in March this year. 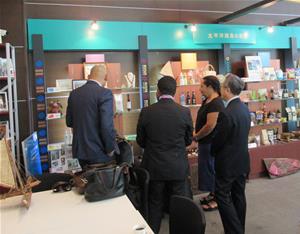 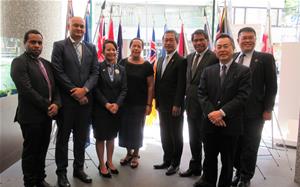