10th October 1970 was the day when Fiji’s noble banner blue was first raised on Independence Day. Thus, to commemorate Fiji’s 50th Independence, the Fiji Embassy in Tokyo hosted a luncheon on Friday, 9/10/2020 to celebrate this momentous occasion. Due to COVID-19 restrictions on large gathering and space constraints, only a few stakeholders were extended an invitation for participation.

The Director for Pacific Island Centre (PIC) – Mr. Ryuzo Saito proposed the toast and in his remarks he stated that “Japan and Fiji’s relationship has not only grown but strengthened over the years”. PIC had in the past also coordinated with Fiji Embassy in Tokyo and Investment Fiji to organize/facilitate two trade and investment seminars in 2018 and 2020 respectively which has sparked interest in Fijian made products and has strengthened the relationship further. HE. Dr. Suka Mangisi – Ambassador of the Kingdom of Tonga, the Charge de affairs Ad Interim, Mr. Samson Yabon from the PNG Embassy, the Counsellor from the Embassy of Samoa – Mr. Justin Lima, the Director of Okinawa Pacific Partners – Mr. Kenta Imai, JICA Country officer for Fiji Mr. Kuniyoshi Watanabe and FET officials and family members participated in the event. 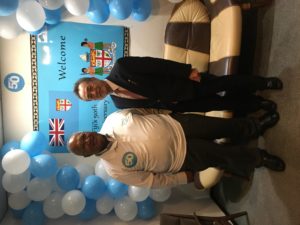