On May 26 and 27, the Tokyo International Art Fair was held in Shibuya's Hikarie complex. This event was a festival for international exchange through art, across differences in languages and cultures. More than 150 artists from over 40 countries showcased contemporary art using various materials and techniques. Their artworks also could be purchased directly on site.

This was the third time the event was held in Tokyo. Mr. Uilli Lousi, a prominent artist in Tonga, participated in this fair with PIC’s support. His works were created to blend the traditional Tonga pattern with modern sensibility, and attracted interest from buyers and other artists who had come to the fair.

Mr. Lousi said, "I would like to thank PIC as well as the Japanese and Tongan governments that gave me an opportunity to participate in this fair, and I am very much proud of attending the art fair at the global scale.” He also expressed his wishes to participate in similar art events in the future. 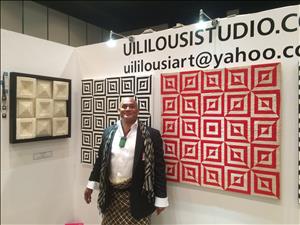