Home > PIC news > Lecture on “Cooperation between Japan and Palau

Lecture on “Cooperation between Japan and Palau

The charm of the Republic of Palau was introduced through displays, seminars and cuisine as a country exhibition at the JICA Global Plaza, for a month of September.
On September 25, in relation with the exhibition, PIC Deputy Director Kurosaki gave a lecture at the International Conference Hall of JICA Global Plaza. The lecture with the tile of “Palau's past, present, future, and Japan's cooperation" was made on the history of Palau and the relationship between Japan and Palau.
In the lecture, he explained that the relationship between Palau and Japan had been rapidly increasing in recent years. Also, he explained Palauan people's wishes to develop the relationship further with such 3 keywords as "the nature and ecology surrounding the people", "the tradition of the Micronesian Region including Palau culture "and "the history of exchanges with neighboring countries " by using photos and videos for each subject. In the middle of the lecture, he also gave quizzes about Palau.
Nearly 30 people attended the lecture and some attendants gave him such favorable comments as "It was a very informative lecture", "It was very helpful in business and private matters." So, it is considered as good contribution to the expansion of business and human exchanges between Japan and Palau in the future. 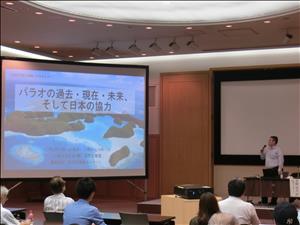