In November 2017, PIC sent the "Marshall Islands Business Exchange Mission", composed of 8 delegates from 7 private enterprises, to the Republic of Marshall Islands(RMI). On November 21st, the mission, headed by PIC Director Saito, attended the "Japan and Marshall Islands Trade and Investment Seminar" co-hosted by the governments of RMI and Japan, at the Marshall Islands Resort in Majuro, the capital city of RMI.

At the seminar (with about 50 people in attendance) representatives of private and public sectors from both countries presented proposals for expanding trade and investment between the two countries.  Attendees included governmental officials from both countries, such as Mr. Iwao Horii, the Parliamentary Vice Minister of the MOFA Japan, Mr. Alfred Alfred, Jr., the Natural Resources and Commerce Minister, and Mr. John H. Silk, the Foreign Affairs and Trade Minister of RMI. It is expected that future bilateral economic exchanges will become even more active.

In addition to the seminar in Majuro, on November 21st and 22nd the mission members also visited local major companies, as planned by PIC in cooperation with the local Japanese company MJCC (Marshall Japan Construction Company).
As the fishery business is an important industry in RMI, the mission visited a fish market as well as a fish processing plant and inspected (by boat) a ”Moi” fish farm on a remote inland-sea. The mission also visited a “rear-cart” factory, to which the production technology was transferred from Japan last year, as well as a manufacturing shop of Amimono (handicrafts), one of the main goods made in RMI, and a canoe building factory. During the tour, the mission laid flowers at the East Pacific Monument to the War Dead. The participants noted that it was a very useful tour because they could inspect facilities that are usually difficult to visit. Through this tour, certain business is already progressing, and even more business developments are expected in the future. 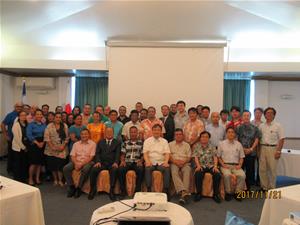 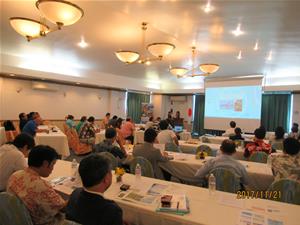 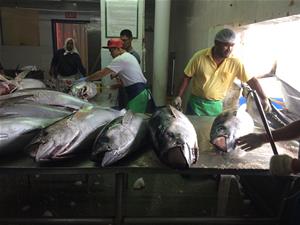 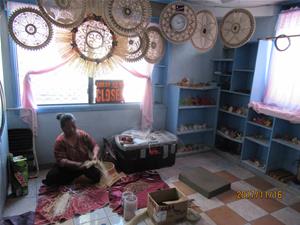 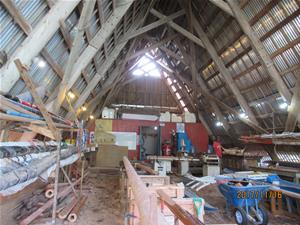 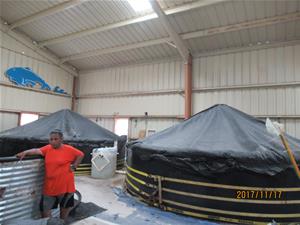