A Very Happy New Year!
I would like to express my deep appreciation for your supporting PIC last year, and hope we might deepen our relationship in 2018.

Firstly, I would like to touch on some activities that PIC accomplished in 2017.
With our 20th anniversary reception in December 2016 as a milestone, PIC set into motion the “PIC Initiative” as one of our goals last year. We produced a promotional article of local foods from Pacific Island Countries in the "Cooking Kingdom", a gourmet magazine published monthly in Japan. PIC also held a "Tonga Tourism Seminar" in cooperation with officers from the Ministry of Tourism of Tonga.
Meanwhile, PIC carried out major activities in the trade and investment field, such as co-hosting the Pacific Islands Business Seminar and dispatching Marshall Islands Business Exchange Mission in collaboration with our stakeholders.

Additionally, I would like to mention PIC’s upcoming plans for this year.
In May, the 8th Pacific Islands Leaders Meeting (so-called “PALM 8”) will be held in Iwaki, and we are expecting a lot of interest in Pacific Island Countries among Japanese people.
PIC is going to tackle various subjects aiming to further expand business between Japan and Pacific Island Countries with the best mix of  the “PIC core projects” that have been going on for many years, as well as a “New Axis” to demonstrate the “PIC initiative”.

Next, I would like to talk about our continuing effort to renew our website. I can promise that we will present a more appealing PIC web page that can be conveniently viewed by both Japanese and foreigners. I think that it will be of great use for PIC as a tool to expand our network with various people who have large interests in Pacific Island Countries .

Personally, as I start to see my third year in this position, I would like to do my best to fulfill the PIC missions as a milestone of accomplishment this year.

I and all of the staff at PIC look forward to a productive 2018. 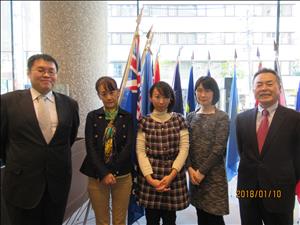