On January 30th, PIC co-sponsored the "Pacific Islands Business Seminar" with JETRO in Iwaki, Fukushima Prefecture, where the 8th Pacific Islands Leaders Meeting (so-called “PALM 8”) will be also held in May this year. Nearly 30 people participated in the seminar, mainly from the Iwaki Chamber of Commerce and Industry and Junior Chamber International Iwaki.

Mr. Shuu-ichi Hirano, Director General of JETRO and former Managing Director of JETRO Sydney office, made the opening greeting, followed by Mr. Kurosaki, Deputy Director of PIC, who explained the business environment of the Pacific Islands and some examples of companies that succeeded in entering the market. Mr. Kurosaki also emphasized "accessibility between Japan and the Pacific Islands has improved significantly in recent years. It is the best time for business to enter the Pacific Islands, including Fiji," as well as Fiji Airways' restarting of direct flights between Narita and Nadi as an example.

In the latter half of the seminar, lectures were given by two speakers promoting economic exchange and social interaction between Japan and the Pacific Islands. First, Mr. Naomi Inoue, President of Joban Kosan Co., Ltd. as well as Honorary Consul of Samoa in Fukushima, explained his company’s business developments in Samoa. He introduced the opening of the first store selling Samoa's apparel brand "Eveni Pacific" in Japan at Spa Resort Hawaiians, operated by his company. Eveni Pacific is a brand focused mainly on shirts and running wear that features traditional Samoan patterns. Consul Inoue said, "we would like to lead other companies to develop business relations with Samoa and other Pacific Islands."  Next, Mr. Haga, Secretary-General of the “Japan Pacific Islands Association” talked about people-to-people exchange with the island nations. When Mr. Haga was at a college student, he established an organization for students that introduced them to internship programs in embassies and lawmakers' offices, and aggressively undertook college student exchange projects between Pacific Islands, including Palau and Japan. In addition, during the last Pacific Islands Leaders Meeting he made efforts to hold "Japan-Pacific Islands Trade & Investment Promotion Seminar," where the leaders of both the islands and Japanese companies exchanged their opinions. He stated, "Interests in the PALM 8 are rising in Japan.  Young generations have to lead business and build friendship."

Finally, Ms. Takada, Promotion Coordinator of PIC, reported about the "Marshall Islands business exchange mission” in November last year. It is expected that such a mission to the Pacific Islands countries will continue after the PALM 8, and the businesspeople from Iwaki expressed their wishes to participate next time.

After the seminar, PIC made a courtesy visit to Mayor Shimizu of Iwaki together with Mr. Shigeoka, the director of JETRO Fukushima Office. The mayor warmly said, "the city would welcome the PALM 8 with a full hospitality as a host city.  Also, as the Rugby World Cup games as well as the Tokyo Olympic Games will be held in Japan next year and in 2020 respectively, I want to visit Samoa and the Pacific Islands by myself to cooperate in promoting business and international exchanges.” 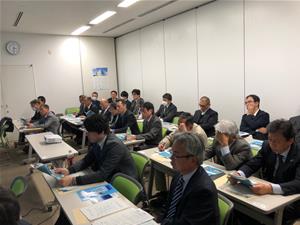 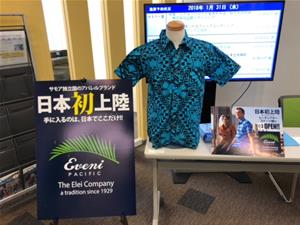 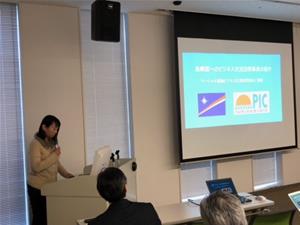 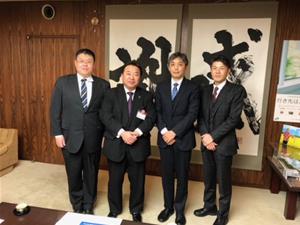