On October 4, a group headed by Mr. James Movic, the secretary general of the Forum Fisheries Agency (FFA), was invited to Japan by the Overseas Fishery Cooperation Foundation (OFCF), and visited PIC to discuss bonito and tuna fishing in the Central Pacific Ocean region. At the meeting, the group was accompanied by Mr. Perry Head, the director of the general affairs division, and Mr. Shunji Fujiwara, tuna fishery adviser from OFCF.

Secretary General Movic described the status of the fishing industry in the region, focusing on bonito and tuna, and asked for advice to further expand technical assistance and investment from both its partner countries and Japan. PIC, in return, explained the importance of the fishery resources in the region, quoting statistical data such as bonito catch numbers and tuna imported into Japan from the region. It also introduced the prospect of one Japanese company investing in a dried bonito factory in the region. 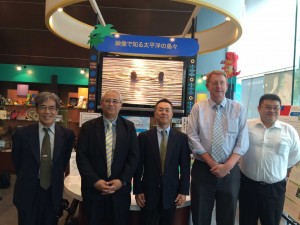