The Pacific Islands Center (PIC) was established on October 1, 1996 and is able to see its 20th anniversary now. It could not happen without the warm supports to PIC and the cooperation from all the people concerned until now, which we appreciate very much.
On December 6, 2016 PIC’s 20th Anniversary Commemoration Ceremony was held at the Meiji University Academy Common Conference Center. We received over 200 people, including President Remengesau of Palau, who gave the toast, and many domestic and international political and financial dignitaries.
At the reception, Mr. Saito, Director of PIC, first graciously thanked everyone for the cooperation PIC has received over the past twenty years and, at the same time, asked for continued cooperation in the future . Then, warm messages were given such honorable guests as Mr. Odawara, the Parliamentary Vice-Minister for Foreign Affairs, Mr. Furuya, the Chairman of the Japan-Pacific Islands Countries Friendship League, Mr. Mataitoga, the Ambassador of the Republic of Fiji to Japan (acting diplomatic dean of the Pacific Island Countries to Japan) and President Tsuchiya of Meiji University.
At the venue, there were exhibits featuring products from the Pacific Islands through PIC as well as symbols of Pacific Island Countries created by “Virtua-World Company” with 3D printers, and creations featuring the beauties of isolated islands in Micronesia by the photographer Masao Michishiro.
During the reception, the Japan-Pacific Islands Kimono Collection was exhibited, showing kimonos insprired by images of Palau, Fiji, Papua New Guinea, and Tuvalu.(produced by the “KIMONO PROJECT” and co-sponsored by Kyowa Shipping Co., Ltd.)
All PIC staff were strongly encouraged to make further efforts into next decade by the warm words from the participants, saying " (at that time of the establishment 20 years ago) it was not anticipated that PIC would become such an institution that involves so many people. Further cooperation is expected to expand business between Japan and the Pacific Islands.” 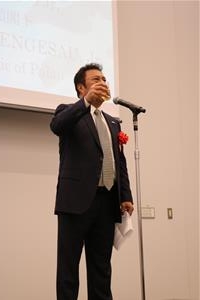 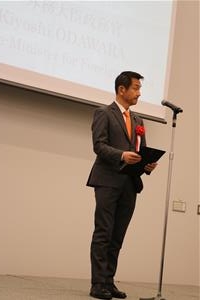 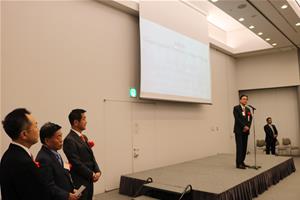 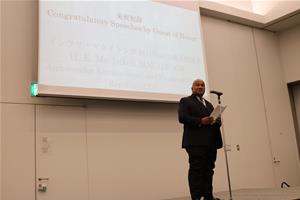