On September 26, Mr. Josefa Taumoto, CEO of Solomon Islands Visitors Bureau (SIVB), and Mr. Christopher Nemaia, Marketing Officer of SIVB, visited PIC to discuss the future tourism promotion in Japan on the occasion of their coming to Japan to participate in JATA (Japan Association of Travel Agents) Tourism EXPO held on that weekend.
PIC Director Mr. Saito said that this year was important for the tourism promotion of the Solomon Islands because “Solomon Islands Tourism Office in Japan (SITOJ)” was opened in April and the opening reception was held in August with great success under the attendance of Mr. Takahiro Kitano, Honorary Consul of Solomon Islands in Tokyo, and Mr. Tomomi Ogawa, the Chairman of SITOJ. He also said that PIC supported the Islands such as publishing “Tourist Guidebook of the Solomon Islands” and conducting promotions of its produce through food tasting parties of coffee and naglinaut at that reception. Mr. Saito concluded himself that PIC would continuously cooperate with the Solomon Islands in facilitating not only tourism but also business.
Mr. Taumoto thanked PIC for its continuous support for the Islands, in return. He expressed his will to enforce the tourism promotions in Japan with newly opened SITOJ. He also said that he would like to cooperate with PIC to increase Japanese tourists to the Islands by holding seminars and other ways. 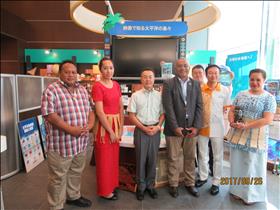