On April 18, Mr. Andrew Nihopara, Permanent Secretary of the Ministry of Culture and Tourism of the Solomon Islands, and Mr. Berney Sivoro, Director of Department of Tourism of the ministry, called on PIC Tokyo at the opportunity of their visiting Japan and exchanged opinions on expanding the recognition of the country in the Japanese market and attracting tourists to the country in the future.

Mr. Saito, PIC Director, said “The function of PIC Tokyo is to support the economic developments of the Pacific island countries through trade, investment and tourism, so we would make an effort to increase Japanese tourists to the Solomon Islands in cooperation for their tourism measures”. Also, he said that the restarting direct flights between Fiji and Japan this year would further lead to increase the demand of tourism in the Pacific Islands countries.

Mr. Nihopara expressed his appreciation to PIC Tokyo on its continuous support. He continued to say that his ministry would work on developing markets in Japan and keep exchanging opinions with PIC Tokyo for increasing tourists to the Solomon Islands.

In the meeting, they shared the understanding that facilities and infrastructure are very important as specific challenges to attract tourists to the islands. For example, the marine diving, which has a certain popularity among Japanese tourists, can be promoted as one of enjoyable activities in the Solomon Islands, while it is necessary to accommodate more stable facilities and employ Japanese instructors, and so on for increasing Japanese divers. 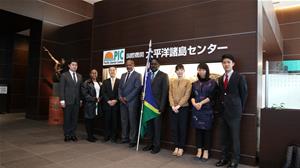