For three days, from 21st to 23rd of August, the 21st Japan International Seafood and Technology Expo was held at Tokyo Big Sight. This Expo was attended by the local administrative organizations as well as business institutions from all over the world to exhibit fishery product and relevant technologies. The Expo lasting for three days closed amid great acclaim with more than 33,500 visitors. PIC decided to attend this Expo aiming to publicize fishery product from Pacific Island Countries and had sought exhibitors from the countries. As a result, the Republic of the Marshall Islands expressed its intention to attend the Expo for the first time and dispatched three people involved in fishery (from Marshall Islands Marine Resources Authority and the local fishery company).

All of this could not have been possible without the cooperation and all the support of our valued partners like the persons in charge of fish market of Marshall Islands Marine Resources Authority, Japanese people who have relevant experience in Marshall Islands and their business counterpart in Japan.
His Excellency Mr. Tom D. KIJINER, Ambassador Extraordinary and Plenipotentiary of the Republic of the Marshall Islands in Japan, made a visit to the booth.

During the event, a number of people from fishery companies visited the booth which displayed such as Grouper, Lobster, Parrotfish, Yellowfin tuna, and tuna jerky. The event realized opportunities of business meetings with retailers and restaurants, which made substantial progress of importing fishery product from Marshall Islands in the future.

Those three people from Marshall Islands made a courtesy visit to OFCF(Overseas Fishery Cooperation Foundation of Japan) followed by a site inspection tour to Uchiura Fishing Port in Shizuoka Prefecture and Toyosu Fish Market.

Especially, to Uchiura Fishing Port, they went together with fishery personnel from Papua New Guinea, who was invited by OFCF, and visited the horse mackerel farm, restaurant and fish product shop operated by fishery association as well as saltery called “Heda Shio no Kai”.
At Toyosu Fish Market, Tsukiji Uoichiba Co., Ltd. conducted a facility tour and participants observed one of the largest fish market in the world. 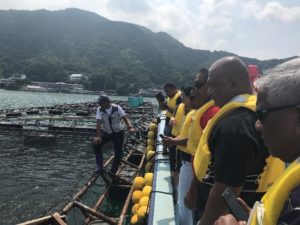 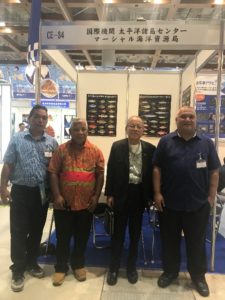 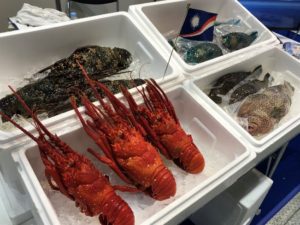