On May 17, the second meeting of PALM&G*was held at the Shima Kanko Hotel in Shima City, Mie Prefecture, and PIC Director, Mr. Saito attended the meeting.

This meeting is a series of events related to the 9th Pacific Islands Leaders Meeting, which was originally scheduled to be held in Shima City, but was held online last July due to the effects of the Covid-19.

About 50 people attended the conference, including the ambassadors of six island countries in Japan, the governors of 11 prefectures including the governor of Mie Prefecture Mr. Ichimi and the Ministry of Foreign Affairs, JICA, and PIC as observers.

At the meeting, local governments summarized the past three years focusing on people-to-people exchange and human resource development, and reported on their activities in FY2021. The island countries have raised specific issues in the three priority areas of healthcare,, environment and sports, and both sides agreed to discuss these issues in the future.

Director Saito gave a presentation on PIC’s projects and cooperation with local governments at the “Japan’s Local Government Meeting” held prior to this plenary session. In addition, on the following day of the 18th, the participants conducted an inspection tour to a Ama (female divers) hut experience facility in Shima City and an online medical clinic in Toba City.

(Note): The PALM&G was established for the purpose of strengthening ties between “Pacific Island Countries and Japan’s local governments”, leveraging the unique characteristics of each region to promote a wide range of international exchange, by the 14 island countries, 2 territories, and 14 prefectures (2 prefectures additionally joined this time) in conjunction with the 8th Pacific Islands Leaders Meeting in 2018. 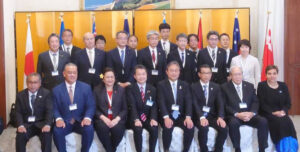 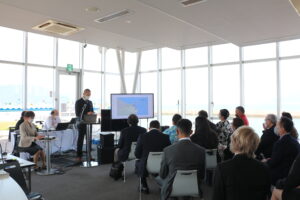