On Saturday, November 13, Mr. Saito, Director of PIC participated in the “Cultural Exchange Ceremony between the Kingdom of Tonga and Ora Town” held at the Central Community Center Hall in Ora Town, Gunma Prefecture. Ora Town has been registered as a host town of the Kingdom of Tonga and also as a host town of cooperative society in March this year, and in order to deepen exchanges in the future, a cultural exchange ceremony was held in the same manner as last year.
On the day of the ceremony, about 370 people, including men and women of all ages from Ora Town and members of the NPO Japan-Tonga Friendship Association, participated in the first part of the ceremony, where various attractions were held. In the second part of the ceremony, a representative of the Japan-Tongan Friendship Association was honored as a person who has rendered distinguished service to the town and Ambassador Suka Mangisi of the Embassy of Tonga to Japan and Mr. Saito, the director, gave congratulatory speeches as guests of honor.
The ceremony was followed by a full-course luncheon featuring Tongan cuisine prepared by members of the association, and the meeting was closed with the participants from both countries chatting in a friendly atmosphere. 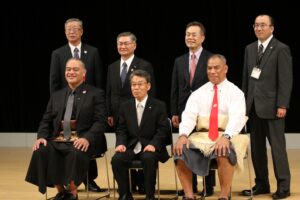 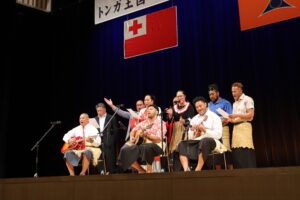